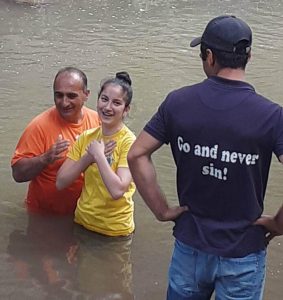 Yester is an 18-year-old girl from Jrashen, a village in Armenia’s northern Lori Province. She was brought up in a family of believers. As a child, Yester went to church with her parents, but didn’t understand much of it.

“When I was a high school student, I befriended a girl who didn’t believe in God,” Yester recalls. “She told me that praying was useless and going to church was for fools.”

Surprisingly, Yester agreed with everything her friend said. Soon, things went from bad to worse. Yester alienated herself from her family, seeking satisfaction in a wild party life. One night, she found herself amidst a bunch of drunk young people. While her friend frantically danced, Yester felt increasingly out of place. She wanted to leave. A young man offered to take her home. Gratefully, Yester accepted, only to find out that he had other plans.

“He was driving like crazy, until he stopped at an isolated place,” Yester shivers. “I jumped out of the car but didn’t know where to go. That guy, I don’t even know his name, started hugging and kissing me, forcing himself upon me.”

Yester wrestled to release herself, but to no avail, until she heard the voice of her father. To date, she doesn’t know how he found her, but she was safe! The dramatic event made Yester realize that she was on the wrong path. She decided to go to church again and during a prayer service, she experienced the overwhelming presence of God. Yester confessed her sins and repented. Hungry for the Word of God, she joined a Project Philip Bible study group.

“My spirit was empty, but God is now filling me with His Word!”

Project Philip stirred a desire in Yester’s heart to be baptized. On Tuesday, September 22, she was baptized in the river near her village. What a day of great joy!

“I thank God,” she concludes. “He saved me from being abused. He sent my father to rescue me. He even accepted me as His child. Now, I want to share the Good News of Jesus Christ with all my friends!”

Bible League is hiring! We are searching for a Maj