When you think of a leader, what do you picture? Traditionally, a leader has years of life experience, numerous situations that have shaped and matured them.

Across the globe, God has empowered kids and teens to step up as leaders in their communities, sharing the Gospel with everyone around them. These young people are on fire for the Lord and aren’t letting their age stop them from their calling.

Faith is a 13-year-old in Zambia. Her family never went to church, and she was under the impression that her parents were the sole factor in the control of her life. “I trusted my parents more than God,” she says. “I didn’t see Jesus playing a critical part in my life.”

But that changed when she began studying God’s Word with a group of friends in a Project Philip Bible study. “Through these lessons, I learned how God created my parents and me. I decided to change my mindset and started to appreciate what God does,” she says.

Faith accepted Jesus Christ as her Savior and was baptized. “I have given my life to Him. From the lessons, I learned to obey God and give in to His existing plan,” she says. “Obedience was more important than saving my own life. I surrendered all to Jesus.” This teenager sees the desperate need for the Gospel in her school and community. She introduced Project Philip Bible studies to her teachers and the program is now integrated into the curriculum. “Through these materials, students’ behaviors have changed, and some have even given their lives to Christ,” she says.

She’s made a big impact, but Faith knows there’s more work to do. “In my community, people come from different backgrounds which causes challenges in spreading the Gospel. Some come from Muslim beliefs, others from Hinduism and still others from indigenous traditional beliefs,” she says. “Many young people don’t like church and are involved in worldly activities such as alcoholism, drug abuse, early marriages, and lust for money. As much as I appreciate that many people in Zambia say they are Christians, there is still much to be done.”

“By introducing the Bible study into my school and church, I realized God can use any person regardless of age, sex, or background. Even young people can be used by God to reach beyond our reach.”

Faith knows God has called her to share the Good News, despite her age. “Coming from a background that didn’t know God, I didn’t know how God called His people. I realized the potential God has given me through Project Philip,” she says. “By introducing the Bible study into my school and church, I realized God can use any person regardless of age, sex, or background. Even young people can be used by God to reach beyond our reach.”

Pastor Mely is a Bible League partner living in a remote area of the Philippines. From health problems to devasting earthquakes to struggles from the COVID-19 pandemic, her life has been far from easy. When asked how she handles these difficulties, she says her faith in the Lord is well-established. But she’s also quick to point to the support she gets from her 10-year-old prayer warrior, Darel.

Darel is the son of two pastors. He’s been Pastor Mely’s prayer and ministry partner since she stared ministry in his area. He travels with her from house to house sharing the Gospel and conducting Project Philip Bible studies. He also helps with cooking and gardening.

Even though he accepted Jesus as his Savior just two years ago, Darel’s faith is boundless. He loves inviting other children to join the Bible studies, prayer gatherings, and feeding programs. During the COVID-19 pandemic, Darel has lived with Pastor Mely because her rural home is much safer for him. She says she experiences Darel’s powerful prayer life several times a day, like one day when they ran out of rice.

She tells the story that one day, they used the last of their rice and had nothing to eat. Pastor Mely told Darel to stay strong, knowing she had run out of money and wouldn’t be able to buy food. But Darel wasn’t afraid. “Why don’t we pray?” he asked. He led a prayer, telling God they trusted Him to provide.

That night before bed, Darel never stopped praying. The next morning, he prayed over Pastor Mely’s coffee, asking God to help it ease her hunger. He remained confident that the Lord would provide. Later that morning, Pastor Mely received a call that another local pastor had transferred funds to her as a “love gift.” It was plenty for them to buy food.

In that moment, Pastor Mely realized the depth of Darel’s faith. When she resorted to fear, Darel turned to God, and his prayers were answered.

Marcela lives with her family in the Villa Dignidad neighborhood in the capital city of Nicaragua. The neighborhood was created by the government for people who once lived around Lake Managua but lost their homes to floods.

Marcela’s mother left her and her siblings with their grandmother to find work to support the family. “The time when my mother was gone was hard on me,” she says. “I would see parents picking up other children at school after classes. I started to become envious of them, and when I was alone, I would cry.” Now, her mother works from home, and it’s much easier on Marcela. 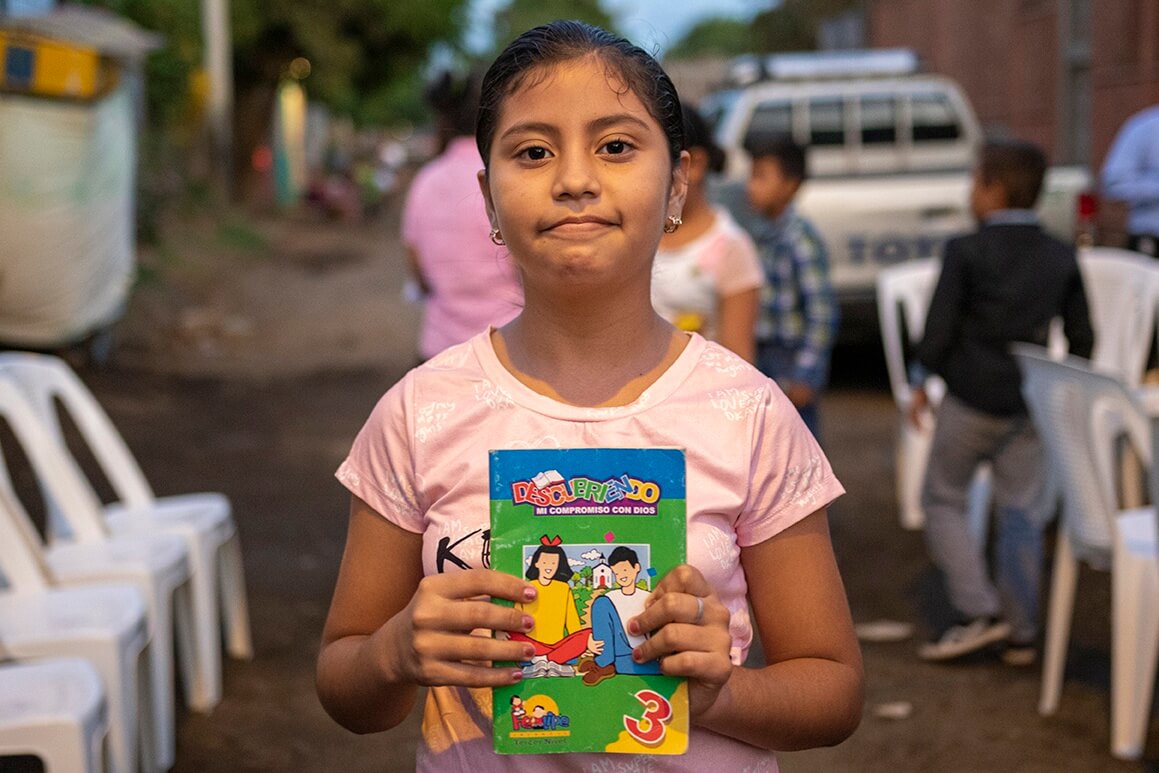 Marcela began to attend Project Philip Bible studies for kids in the neighborhood. Her friend Dana invited her and mentored her through the lessons. “It was studying the booklets in our Project Philip studies that I received Jesus Christ,” she says. “Dana started to help me go through my booklets, she explained the lessons to me and other children.”

“Soon, I was also helping other children as I began to understand the Word of God.”

Jesus has changed Marcela’s life, and now she wants to spend her days sharing the Gospel. “My dream for when I grow up is to be a missionary or pastor,” she says. “I like to teach kids here and even adults, and people have told me I do a good job when teaching. I want to take time to lead others to Jesus Christ as the people in my church have done for me.”

The surrounding areas of Buenos Aires, Argentina, do not look like the postcards you may see of the beautiful country. The outskirts of the capital city are poor, dangerous areas. In the town of Rafael Castillo, about 65% of the 270,000 residents live below the national poverty line. The city is also plagued by crime and gangs.

But in the midst of the hopelessness, there’s a spark of joy in 14-year-old Isaias. Isaias comes from a large family with Christian parents, but sadly, his parents began to lose faith. “They were in church for 28 years, but they distanced themselves from God,” Isaias says. “I think it was because life was so hard, and after many years, they lost a bit of hope.” But he never gave up on his faith. “It was clear to me that my parents’ lives were worse without the Lord, so I began to feel a sense of responsibility for them. I knew I needed to help.”

Isaias tried to continue studying the Word of God on his own with his parents’ Bible, but he struggled to understand it.

“Right in the first class, I was thrilled! Project Philip changed me and the way I understand the Word of God,” he says. “In the past, I tried to read the Bible with a dictionary in hand, but today I do not need that anymore.”

Isaias’s faith has completely changed now that he can understand the Word of God, so much that he has dedicated his life to sharing it with others. “It was obvious to me that kids at my age needed to understand the Word of God better, especially here in this neighborhood,” he says. “Project Philip helped me understand things that I could not see before. The studies help children, teens, and adults. I can share the Word so easily now!” Isaias is now preaching to local children and teens in his community.

He can’t help but pour out gratitude to Bible League supporters who have changed his life.

“Thanks for giving me a Bible. I hope God will give you much more than you have given us. You deserve it,” he says, “My dream is to be a pastor, so please pray for that, and also pray for the kids of my community. They need Bibles, they need the Word of God that they can understand.”

Kids around the world are clinging to the Word of God and sharing it with anyone who will listen. They are falling in love with Jesus, and it is so encouraging to hear tales of their devotion.

These stories are just a small glimpse into the impact of your support around the globe. This impact so often begins with kids. God’s Word changes lives, families, and communities. And if, together, we do our part to share it, it will change the world.